THE ROLE OF WOMAN IN THE HOUSEHOLD 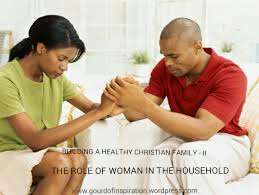 There are a lot of misperceptions in contemporary culture about “roles” in marriage; most of which lead to divorce. This compels us to understand what the Bible says about the matchless responsibilities God assigns to a woman (playing both roles of a wife and a mother).

In Genesis 2:18-23, we learn that the intent with which God created woman was to make a companion who will help man as it is written:

[And the Lord God said, ” It’s not good for man to be alone. I will make a companion who will help him”. So the Lord God formed from the soil every kind of animal and bird. He brought them to Adam to see what he would call them, and Adam chose a name for each one. He gave names to all the live stock, birds and wild animals. *But still there was no companion suitable for him. So the Lord God caused Adam to fall into a deep sleep. He took one of Adam’s ribs and closed up the place from which he had taken it. Then the Lord God made a woman from the rib and brought her to Adam; NLT]

In the scriptural account above, we get to know that God realised that man was lonely and it wasn’t good. Have you asked yourself why God’s immediate action in creating companionship for man wasn’t making woman but rather forming animals from the soil for Adam to name them? Why was this so? Is it because wo-man wasn’t in God’s creation plan at all and only came as a by-product of man’s loneliness? A big fat no!

Long before mankind was created, God’s plan of creating male and female kind of man (thus many of them) is clearly outlined in Genesis 1:26-27:

[Then God said, ” Let us make people” in our image, to be like ourselves…” So God created people in His own image; God patterned them after Himself; male and female He created them; NLT]

Woman was in God’s creation plan but as I said in the earlier episode, God’s creation followed perfect timing and order so there was no rush in creating woman right away. This order of creation emphasizes the essence of woman to man. Isn’t it rather fascinating to know that woman was the last of creation and arguably, the perfect of all? (I guess my ladies are blushing by now).

Animals couldn’t make good companion for man because there was no somatic and emotional connection. On the contrary, woman was made out of man and her perfect match for Adam is evidential in man’s reaction when God brought woman to him.

[ “At last!” Adam exclaimed. “She is part of my own flesh and bone! She will be called ‘woman’, because she was taken out of man”. This explains why a man leaves his father and mother and is joined to his wife, and the two are united into one. Genesis 2:23; NLT]

In the earlier episode, it was made evident that God has established the headship of the husband over his wife and his children (contrary to popular teachings of our Egalitarian friends).  There are many women who are repugnant about this truth and try to project their decisions and interests above that of their husbands mostly in the name of gender equity. 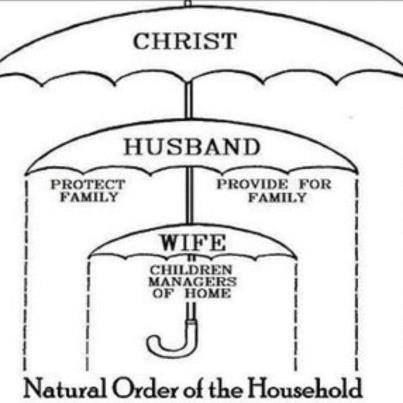 The Bible teaches gender equality but frowns on wives who disregard their husband’s headship the same way it does to husbands who maltreat their wives. Isn’t this ironical?

The wife must follow her husband’s leadership. A christian household will be healthy in service to God if the wife doesn’t rebel against the authority of her husband. The fall of man came when Eve disobeyed the husband’s warning to the household from God not to eat of the fruit of the tree of knowledge of good and evil. This way she hadn’t only disobeyed her husband but also God.

Most men also don’t understand male headship in marriage and confuse it for dominance and tyranny. This is what even submissive wives hate and sooner or later, try as much to deflate the pride of their men.

Through out the Bible, man is said to be the head of his household and not the master of his household. The two are different. “Master” is more of a bossy role whereas “Head” is of a leadership role. Male chauvinism is a perversion of male headship that set into marriage after the fall of mankind as we learn from Genesis 3:16.

[Then he said to the woman, ” You will bear children with intense pain and suffering. And though you may desire to control your husband, he will be your master; NLT]

As a christian woman, this curse of womanhood is never your portion for you are a new creation set apart from the curse of sin. Your husband will only be head over you and not master over you! This is why as a young woman, you need to marry a man who has the knowledge of God and set free from the bondage of male chauvinism and tyranny.

It is a very important truth to know that the woman is the manager of the household.

[ “Therefore, I want younger women to marry, have children, manage their households, and give the adversary no opportunity to accuse us.” – I Timothy 5:14; HCSB ]

The phrase “manage their households” in I Timothy 5:14, is an English translation of the Greek word “Oikodespoteo”, which comes from two Greek words “oikos” (house) and “despoteo” (to rule). This literally means to “to occupy one’s self in the management of a household”.

Proverbs 31 also speaks of the role of the wife in the Bible. We learn of her worth to her husband and family, how she cares for those who need her, how she provides for her family, protects them, and shares her strength with others. She fulfills her responsibilities with grace and strength. We also learn that a wife is a blessing to her husband. She is worth more than rubies! Wives can follow her example by living in the wisdom of God.

Other roles of woman in the household is mentorship, witnessing and exemplary living as seen in Titus 2:4-5, 1 Peter 3:1 and 1 Timothy 3:11 respectively.

Every industry has a CEO who isn’t necessarily the owner of the firm. Without a manger to assist the CEO in overseeing the affairs and contracts of the company, the goals of the company, no matter how great, won’t be accomplished. Obviously, no industry can be successful without an effective working staff.

The staff need supervision and management by the manager and so it happens that the manager mostly relates to the staff more than the CEO. At the end of the day, we realise that in building a reputable industry, all members of the company must co-relate properly.

The above scenario helps us understand the family structure better. The owner of the household (industry) is God who has appointed man to be the CEO. The man partners with the woman (manager) to govern the affairs of the household (industry). The children (staff) are the resource in the household who aid in accomplishment of the set goals. The society is the client of the industry (household). A healthy christian family has a positive influence and impact on society.

The nature of the role of the woman in the household as a manager (in the face of wife and mother) is such that she relates more with the children from  infancy to adulthood and seems to play more domestic roles in the family. Altogether, both roles of the man and woman are essential in building a healthy family.

I’m sure you’ll be wondering why the first two episodes of this series is juxtaposed on the politico_spiritual roles of man and woman. This is simply because the basis of every healthy christian home is spirituality. Spirituality is more than we think and births good health, wisdom, prosperity among others.

We will tackle “The Socio-economic roles of both man and woman in the household” in the next episode.

This entry was posted in Christian Prose. 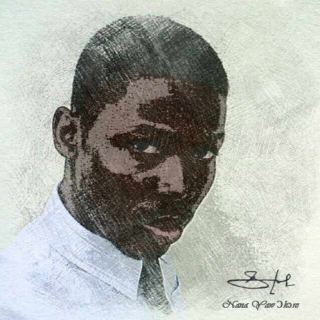 I'm a young versatile person with the goal of causing an impact in the Ghanaian society and Africa at large with the skill of writing and public speaking. I believe in human equality that regardless ones tribe, religion, gender, political affiliation, educational background, financial orientation or social status, we are one people.